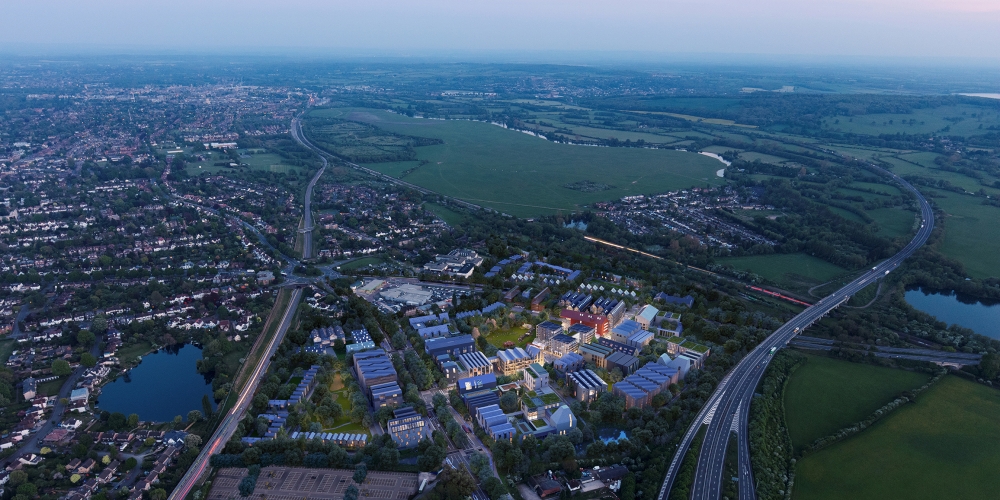 Today, Thomas White Oxford, on behalf of St John’s College, Oxford, has unveiled its plans for a new business community for Oxford and commenced its public consultation period.

Oxford North, previously known as Northern Gateway, will be a thriving and vibrant business community with innovation at its heart.

Oxford North will be unlocking previously inaccessible land to residents, visitors and people passing through, transforming the area by introducing tree-lined city streets for the A40 and A44 and building a new central street, and a mix of workplaces, homes, shops, leisure, arts and culture, and open green spaces for everyone to enjoy.

It will be delivering 87,000 sqm of workspace, creating around 4,500 new jobs, 480 new homes for circa 1,500 people, both market and affordable, 23 acres of open spaces including three new parks.

The new urban district will see £100 million of infrastructure investment, including £30 million

being spent on improving the walking, cycling, bus and highway networks to create a truly connected community for Oxford North residents. It will link to the City centre and Oxford Parkway with 5.7 miles of new or improved cycle paths and be the gateway of the Oxford to Cambridge corridor.

There will be £5.9 million of advanced A40 transport infrastructure improvements, with funding having been secured from the central government Local Growth Fund by Oxford City Council, Oxfordshire County Council and Oxfordshire LEP.

It is forecast that once complete, Oxford North will be adding circa £150 million per year in gross value added to the economy.

Oxford North has been designed to address the policies contained within Oxford City Council’s:

Julian Barwick, project chairman, Oxford North said: “Oxford North will be a community including homes, day and night life, culture, entrepreneurs, scientists, venture capitalists, finance and big corporations, all needing to create business growth through collaboration and staff and residents’ well-being. It is designed by a world-class team to provide a place that has urban energy and is sustainable.

“From my personal perspective, this is a once in a lifetime opportunity for Oxford. Oxford North will be not just of local importance, but also significant at the UK and international level, supporting the world-class research that takes place in the city and creating a setting where it can flourish and adding to the economy. Our investment into the infrastructure will be significant. We look forward to sharing our designs for the emerging masterplan at the forthcoming public exhibitions and continuing our positive discussions with Oxford City Council on the details of the final scheme.”

Nigel Tipple, chief executive, OxLEP said: “Through world-class assets – like the University of Oxford, Harwell Campus and Culham Science Centre – our county’s economy is already having significant global impact. The Oxford North development has major potential and can become another key asset of our economy, generating new jobs and offering a vibrant and innovative community that will embrace innovation. Working alongside partners, we will continue to champion our economic potential ensuring that we do so in a responsible and sensitive manner, developing an infrastructure to match.”

The public consultation process will be seeking the views on Oxford North’s proposed plans before Thomas White Oxford applies for outline consent for the overall masterplan and detailed consent for the first phase of development. The applications will be submitted at the end of July 2018.

Commonplace, a secure online engagement platform, is being used to help gather people’s thoughts on the proposals for Oxford North. People are able to visit www.oxfordnorth.com and follow the link to ‘Join the Conversation’.

The consultation closes at 11pm on Sunday 22 July 2018. Once the application has been submitted, Oxford City Council will carry out its own statutory consultation exercise.

To see more and join the conversation, please visit: www.oxfordnorth.com.